The character within a soul

The woman in the person of Madre Maria Nazarena Majone is an exemplar of a life of simplicity yet her life was also full of struggles. She faced a lot of trials which opened her heart to accept her calling. She had a character that an ordinary person could give you an idea about.

In January 2014 we, the teachers of Padre Annibale Integrated School, attended a retreat in Marikina City, Philippines. This gave us the opportunity to learn more about the character of the Daughters of Divine Zeal’s co-foundress, Madre Maria Nazarena Majone .

We teachers also have varying characters which were observed during the retreat. Some of us showed selfishness in the sense that we could not even share the little space that we had while we were on our travels. Some of us were exceptionally domineering in that we only wanted our way to be followed. Some of us were silent to the extent that we always agreed with what others were saying, so that the only words that needed to be heard were “I second the motion”. Some of us were so earsplitting as we cracked jokes with very thunderous voices without thinking of the silent moments needed by others. Some of us were always complaining – we did not know how to be patient with any discomforts during our retreat.

I am not judging anyone here. What I just want to say is that we do not have pious characters. For this reason I greatly envy the spirit of Madre Nazarena. 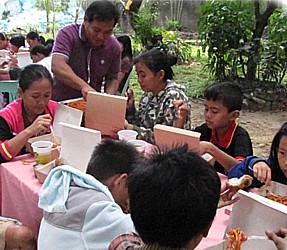 It is true that no two people are alike. Thus, the understanding of these individual differences is necessary to avoid the clash of ideas and opinions. What if Madre Nazarena’s way of living  was put into practice by all of us? People with Love, Faith and Hope would be everywhere! There would be no problems about characters being at odds with each other. There would be no squabbles between two dissimilar persons.

We and Madre Nazarena are not alike. We may not do all the things that she did but there is something common between us – we are educators. We patiently mould young minds. We give our best for these little ones that need to be prepared for their future. We uncomplainingly sacrifice every bit we have to make them better persons. We not only shape these our students’ characters but also open their hearts and nourish their souls. We accept the fact that we are their parents when they are away from their homes.