Vocations: Passion of His Life – Introduction 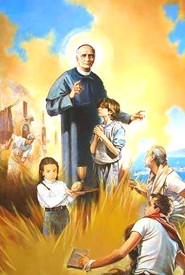 “The problem of priestly Vocations – and even of both male and female religious Vocations – is the fundamental problem of the Church. It is a test of its spiritual vitality and the condition of such vitality. It is the condition of its mission and of its development.”[1]  With these words John Paul II, in his homily on May 10, 1981, closed the 2nd International Congress for Vocations. This was also the belief that led Saint Hannibal Mary Di Francia to spend his whole life for the cause of Vocations. He wrote: “Imagine for a moment that the Priesthood, like the setting sun, were turned off. Would not the whole world be in darkness? Where would be the worship of God, the sacraments, the Most Holy Eucharist, the Word of God, Faith, Charity? All would perish. Imagine for a moment the opposite, i.e. that the earth is filled with elected Ministers of God, numerous priests and saints; so numerous that there would be one for every hundred inhabitants of the globe, so Holy that they would equal the ancient Apostles: wouldn’t this be the sudden salvation and happiness of all souls, no one  excepted? Inscrutable judgments of God! The Almighty wanted to connect the abundance of worthy Workers of the mystical harvest to the prayer for obtaining it! He gave it as a command to the Apostles and the disciples, and he repeated it several times saying: “Messis  multa quidem Operarii autem pauci: Rogate ergo Dominum messis ut mittat Operarios in Messem suam.”[2]  “It is contained in the Divine Word of Jesus Christ every good for the whole Holy  Church, for the whole of society, for all souls.”[3]  And the Divine Word is the soul of the  whole work of Saint Hannibal Mary Di Francia, aimed at highlighting the primacy of prayer to obtain Vocations. He wrote thus to the Bishop of Parma, Mons. Conforti: “One may note that  therefore’ – ‘ergo.’ It did not say ‘Ergo you work to form Priests’, ‘Ergo you gather money’ and others, but it said ‘Pray!’ What good can we hope for with all our efforts if we neglect the great remedy pointed out to us by our Lord Jesus Christ?”[4]  However, Saint Hannibal Mary Di Francia urged everyone to join action with prayer in order to achieve the desired effect: “One should observe that in the order established by Providence, prayer and action must go together to have their effect. To pray to the Lord to send good evangelical workers and then not cooperate as one could and should is to pray in vain. Conversely, to work for the  formation of priests and not to accompany it with prayer, is work lost. To desire to form  priests without asking the Lord is the same as being reduced to an artificial culture of  clerics. The grace of vocation comes down from above, and it does not come down if no one  asks.”[5]  In the light of these brief introductory reflections we can synthesize thus the  spiritual profile of Saint Hannibal Mary Di Francia: the lack of good Vocations was his  agony, their promotion his passion and the propagation of the prayer to obtain them his  obsession.