You are a teacher forever 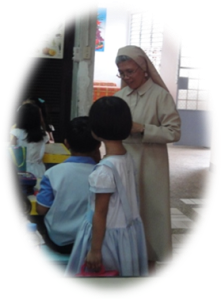 Before I came returned to the Philippines, Mother General told me that I was going to teach. It was like a bomb to my ears and I felt a violent reaction within me. Not only that, there were many questions at the back of my mind such as: “How could I teach after sixteen years?  Would I still know how to teach?  Would I still be effective?” Then after reflecting, I realized that it was better to obey, precisely because “obedience makes miracles”.

Arriving in the Philippines, I enrolled for two months of an English updating course. I admit that it was so hard to adjust even though I was in my own country. Everything was new to me!

And finally classes started! I was asked to be the class adviser of the Grade IV pupils. For the first three months, I found the lessons difficult and a little more advanced. Therefore, I needed to exert more effort in studying to try and give the best of myself. Indeed, finding God in all the circumstances in the school and in the community was my consolation. With the grace of God, I reached the end of the school year 1999 – 2000. After that year, I was transferred five times to different communities and a teaching role never entered the scenario again.

In 2009 I returned to Marikina, Phiippines and have been here to date. One day Sr Connie, the school principal asked me: “Do you want to teach?”  Spontaneously I said YES! I don’t know what motivated me at that time as I had not taught students for more than a decade. Furthermore, I felt that the children of today were much more difficult to handle than in the past.

Yet deep within, I felt a strange joy which I could not understand and explain. In fact, in one moment of my personal encounter with the Lord I asked: “What is this Lord? Do I really want to teach? Is this Your will or my will?” I believe that teaching is not a joke “è molto impegnativo” (it is very demanding) and at the end I said: Yes, Lord,  “sia fatta la tua volontà” (Your will be done).

In this field, I am challenged that I am still remembered by my former pupils, even the naughtiest among them. How time really flies! Without our noticing it, days, months and years have gone by but they still remember us. Indeed, many things have happened, for example one of our first graduates, whom I had once taught, was already a Certified Public Accountant – I was so happy to learn that he had made it! Another instance occurred recently while I was waiting for my next class – a grade VI pupil approached me, she asked my family name and she then told me that her mother was one of my former pupils when I was still outside the convent. Though I could no longer remember the face her family name sounded familiar. This is why I told myself:  “you see, you are a teacher forever even if you have stopped teaching for such a long time… “

This time around, being in the school once again, I notice that I am more enthusiastic in teaching. It inspires me to be more courageous and zealous. It challenges me to better love the children as our Father Founder commanded us as educators:   “…children should be the greatest ideal of our life…”I  try as much as possible to give the best of myself and impart to them the knowledge and the gifts that God has given me, for His glory and for the salvation of souls. My total surrender means I depend and entrust everything in God’s hands and all will be well! Let us always glorify God in all we do.